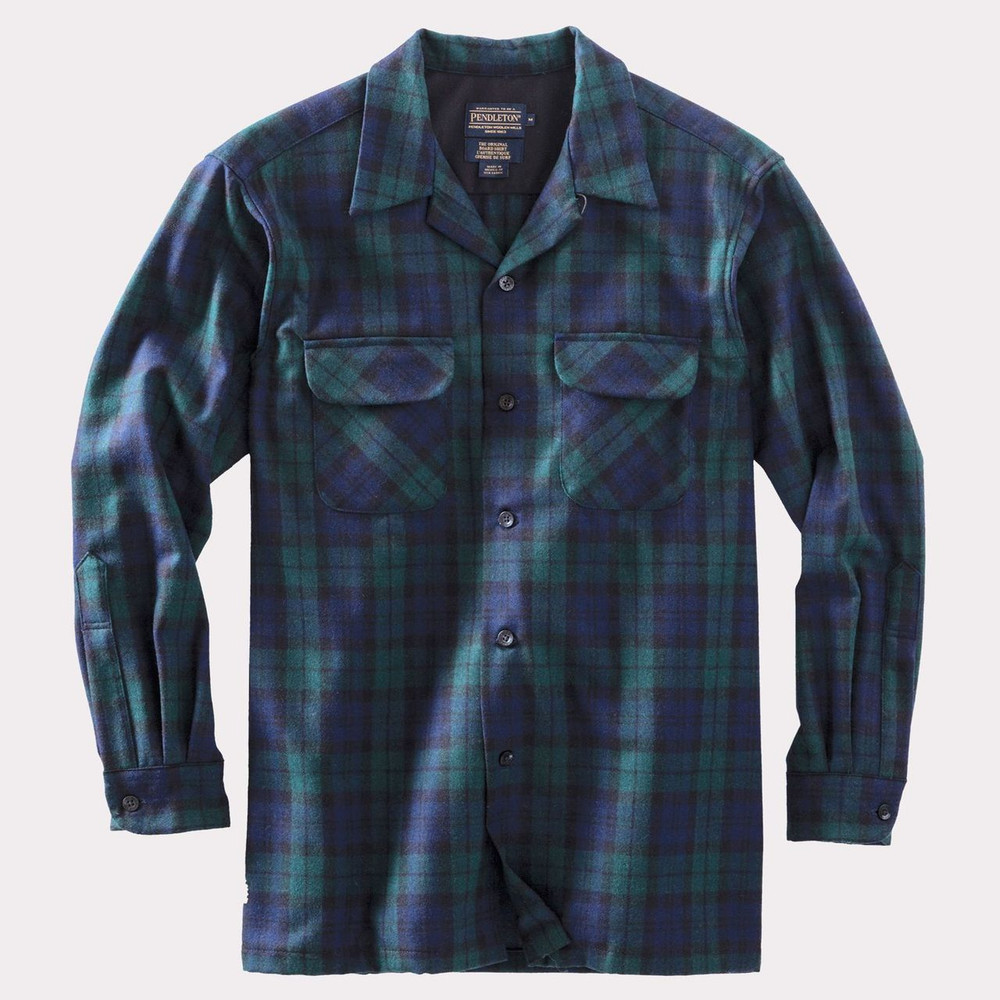 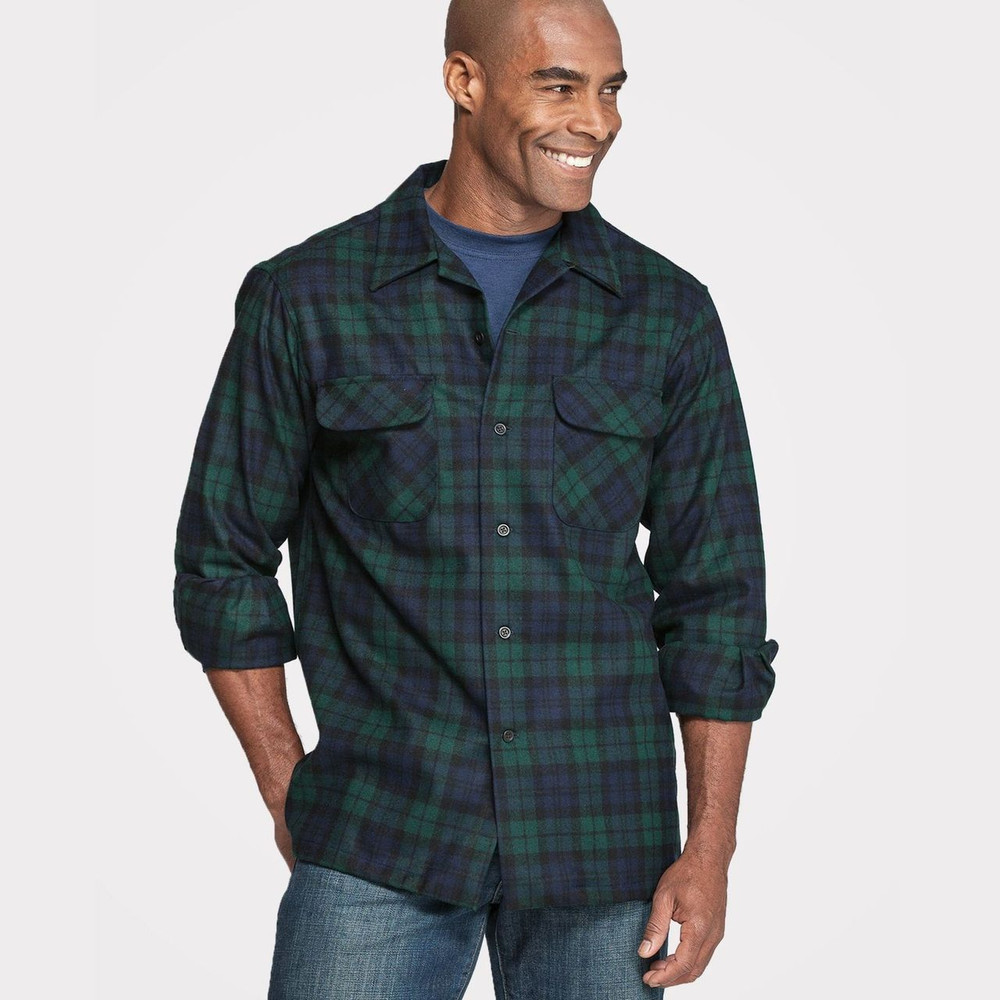 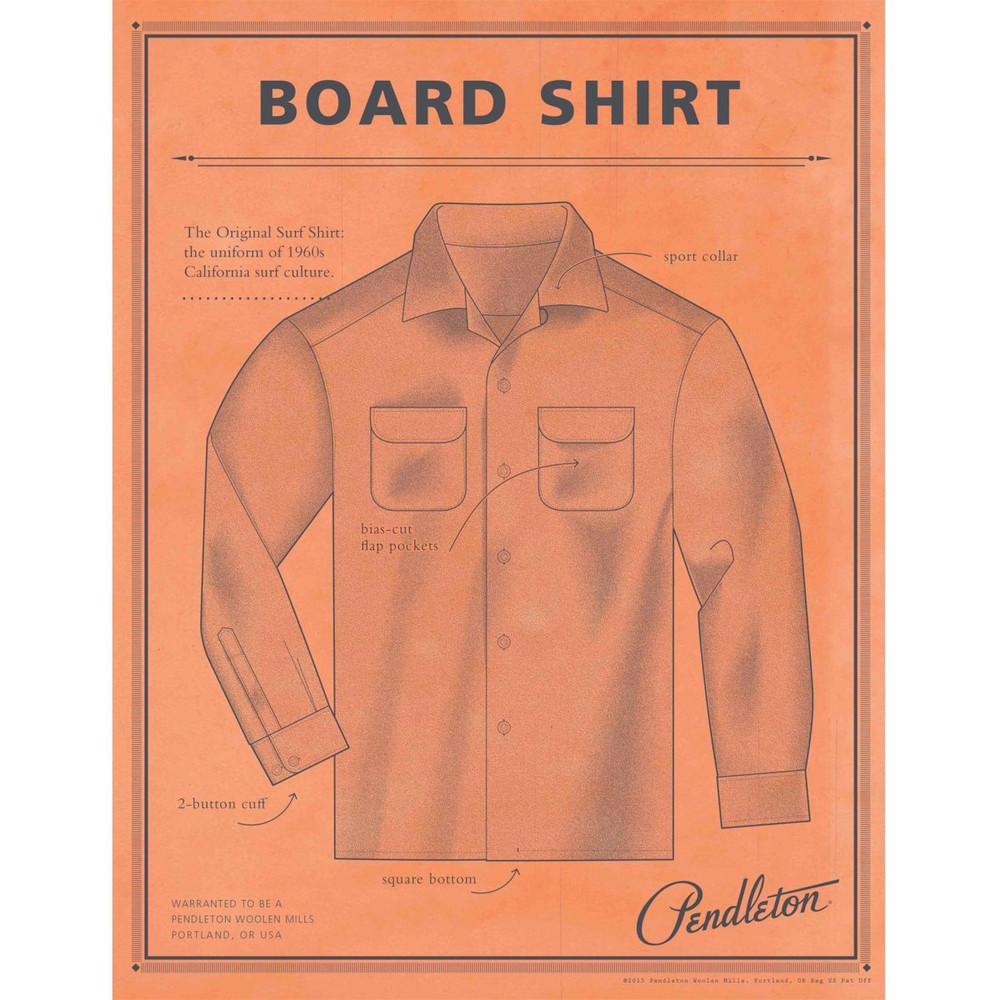 This shirt is popular wherever guys head for the great outdoors. Riding the waves or riding the range, men count on the natural warmth and superabsorbent comfort of our wool shirt jac.
Midweight Umatilla wool fabric is woven in our own Northwest mills. Square bottom and bias-cut pockets. 100% pure virgin wool. Machine wash. Imported of our own USA fabric.

From the Pendleton collection of authentic Scottish Tartans
The 42nd (The Black Watch). This famous regiment had its origin in the Independent Companies of Highlanders raised in 1725. Their duty was to keep peace in the Highlands. Ten years later, the government formed them into a regiment of 1,000 men. They assembled for the first time on the banks of the Tay, near Aberfeldy, in 1740. They were dressed in their now-famous military tartan, and because its dark color was so distinct from the scarlet uniforms of the regular army, the regiment was known as the "Freiceadan Dubh," or "Black Watch."

A letter from one of our customers:
Hello,
I read with interest the copy (on your site) and thought you might want to read a little more Pendleton trivia from the Southern California of the 60s.

I grew up in the Inland Empire -- San Bernardino County. Some of my contemporaries made it pretty big in the music industry. Maybe not as big as the Beach Boys, but big nonetheless. Jimmy Webb (who wrote "Up, Up and Away", "Wichita Lineman" and "MacArthur Park" among other hits, was from Colton, my hometown. Jim Messina, of Loggins and Messina, who also played with Poco and Buffalo Springfield, got his start in Colton in a band called The Pendletons. His bandmates in that group included Dave Archuleta on sax, the Wagner twins on rhythm guitar, a man with the surname Rose on bass, and Walker brothers on piano and drums. They all wore Pendleton shirts.

I wanted a Pendleton shirt in the worst way, and finally got one. It was too small, but it was used, and the best my parents could do, so I wore it proudly.

The "uniform" back in those days of surfing music was white Levis, black low-cut Converse tennies, and, of course, a Pendleton shirt. In case someone might forget, a local hit had heavy rotation on the local radio stations, KFXM and KMEN -- "White Levis"

You see, it was de rigeur to wear a Pendleton several sizes too large. That was an unachievable reality for me at 6'7" and 235 lb in my sophomore year of high school.

I did play in a surfer band, though, and we alternated weekends with Messina at the Colton CYO.

Them was the days.

Umatilla Wool
We introduced the first colorful, patterned wool shirts to men more than eight decades ago, and guys have been clamoring for them ever since. Rugged, 10-oz. medium-weight Umatilla Wool cloth is still woven in our Northwest mills.You can see and feel the Pendleton passion for quality. See it in the intricate patterns of blankets inspired by Native American designs and legends. Feel it in the softness of the lightweight, luxurious 100% pure virgin wool clothing we produce. We've been a family-owned business for 150 years, and for 104 of those years we've been weaving world class woolens in our Northwest Mills.

About Pendleton
You can see and feel the Pendleton passion for quality. See it in the intricate patterns of blankets inspired by Native American designs and legends. Feel it in the softness of the lightweight, luxurious 100% pure virgin wool clothing we produce. We've been a family-owned business for 150 years, and for 104 of those years we've been weaving world class woolens in our Northwest Mills.

It fit well and is soft and very warm

Black Board Shirt by Pendleton